Congratulations to Imogene Nix on the release of A BAR IN PARIS. To celebrate, Imogene is going to take us behind the bar for a peek at the characters behind the story. 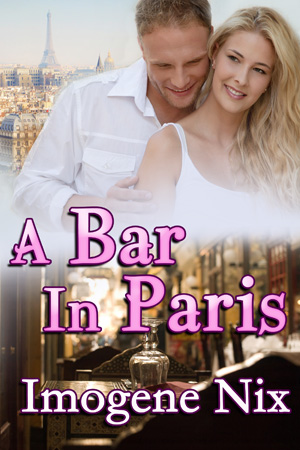 Tell me a little bit about yourself :

I was born in Queensland and went on my first overseas jaunt at the age of 4 weeks, when my parents moved back to England, before we made the trek back to Australia when I was 4 years old. I came to travelling at a very young age! Since then I’ve lived in a range of locations including Thargomindah in South West Queensland, Julia Creek, Atherton, Hervey Bay, and even in Tasmania. These days, home is in the North Burnett Region. That’s one of the things that got me into book selling, which is how I finally made the jump to writing. I wanted a “job” that didn’t matter where I lived. I certainly managed that!

My journey into writing took many years, though the final steps were extraordinarily quick. I blame the Australian Romance Readers Association for the final jump, as I was at the Bondi Conference in 2011, where I listened to Lexie Couper and friends talk about their transition. For me, that was it. I came home enthused and within 3 months, Starline was written.

I usually write in my office, filled with books and all my lovely treasures; statues of vampires, fairies and even The Dark Queen (think Marvel Comics there!) Although at school holidays I tend to migrate to the dining table so I’m not totally anti-social!

What inspired you to write A BAR IN PARIS?

That’s really hard! It started out as a lark, could I write in first person? Well, yes I have done it… but apart from that… I don’t know… it was just there, in my head!

What would your ideal ‘naughty weekend’ be?

No Kids!!! 🙂 No phones (the biggest bug bear is trying to sleep in and getting a phone call at six thirty in the morning!) Breakfast in bed (a total luxury) and not having to vacate the hotel room by 9am (my husband’s favourite thing)

What made you choose Paris for the setting?

Paris is the ultimate location for a sexy weekend. (One day…) It just made sense to me that an Aussie living in London would head to Paris for a wild weekend.

‘How can she possibly resist his magnetism and that sexy dimple?’ What is it about dimples that has men and women alike weak at the knees?

It hints at the devilry that makes women weak! I think they are so legendary because men with dimples are taught, at a young age, that they are irresistible to those of the fairer sex… and they know how to use it.

What helped you put ‘heart’ into your story?

I think good writers find it is part of the unexplainable factor of writing. To me, it comes while I type, it’s not something I do consciously. It’s really hard to describe, because for me, it’s just kind of there.

Tell us a little about the research you had to do to write A BAR IN PARIS.

Well we all know of the legendary beauties of Paris, but trying to find the right location was key to the story being believable. I wanted the right hotel, one that wasn’t a “big name” corporate entity. It had to be boutique enough that it offered a different and personalized touch. (Yes it is a real hotel, I’m just not going to tell you which one!)

The location had to be perfect! Close enough to the Seine to let me tell my tale the way I wanted to. I walked the length of the Seine (virtually) looking for the right place to be!

I’m a demon for research, so every fact has to be checked and correct before I start writing (at least as much as I can, without physically stalking the location, that is!)

‘Will a lie of omission bring everything into jeopardy?’ True love always comes at a cost. Would you like to share an excerpt here on a challenge Davina and Johnathan face in their journey?

I said a silent ‘thank you’ when there was no one at the desk and I dashed away the tears that fell. Of course that was short lived, as one of the clerks answered the imperious ding of the small brass bell.

“I want to check out.” I gave my room number, and the woman tapped on the computer then looked at me with a smile.

“Oh, your bill is already taken care of.”

“What? No. I haven’t paid my bill yet.” I leaned in, but the woman patted my hand.

She swung the screen around so I could see. It had a bright red Paid In Full on the bottom of the screen, and I ground my teeth. Doesn’t he realize that makes it worse? But of course not.

He had no idea that I now felt like I’d been paid for services. Turmoil and anguish warred, but I concentrated on breathing deeply. On staying calm. I could let go when I finally entered my flat in London.

Seething , I nodded and headed for the door. “Miss Chandler? Do you want a car?”

I stopped. In my anger, I hadn’t even considered how I’d get to the airport. I wasn’t going to take his bloody car. But she could order me a taxi.

Her smile melted away and on her face there was wariness. But she didn’t argue, instead lifting the handle of the phone and ordering transportation for me. When she hung up, she smiled carefully. “It should be waiting outside now. I have been instructed to let them know that we will pay your fare.”

God, that just rubbed salt into the wound as I stalked through the lobby and out the door.

How did you meet the hero in your life?

Well that is the easiest question of all! My husband 🙂 I actually met him through a youth organization when I was in my twenties. I needed help with my university entrance. It started off with talking on the phone for an hour at a time. Then when I met him in person… phwoar! 😀

Tell us a little about Davina and Johnathan and how you breathed life into their characters.

Oh wow! Umm, A Bar In Paris evolved over several days. It was one of those tales that simply unfolds as you write. Breathing life into these characters was easy, because from the instant I “met them” I had a connection.

Neither realize that they are looking for love, neither are as polished or certain as they purport to be. They are so much!

Ever considered a naughty weekend? A “Hook-Up” with no strings?

Turning 30? All alone? A commitment-free weekend in Paris should help…shouldn’t it?

What does a single woman do when she’s turning thirty? She takes a weekend trip to Paris looking for commitment-free sex. Or that’s what Davina Chandler does, anyway.

Enter Johnathon, a tall, charming Englishman. How can she possibly resist his magnetism and that sexy dimple?

What starts out as a lark quickly becomes so much more, but can one weekend turn into a lifetime? And will a lie of omission bring everything into jeopardy?

One thought on “Meet Imogene Nix in A Bar in Paris” 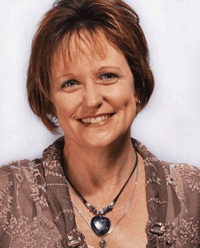